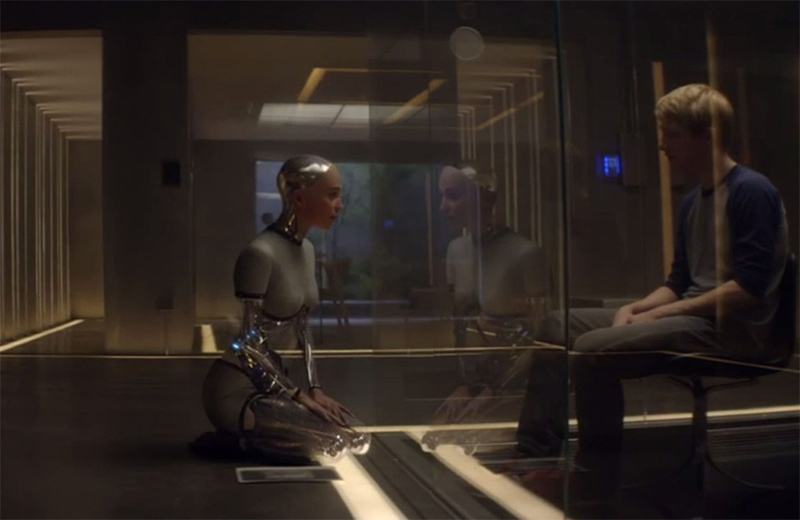 Ex Machina does almost everything well.  It looks gorgeous and cinematic. The three leads turn in outstanding performances in roles that are interesting. The story is immediately compelling, tense and thought provoking. It holds up, right up until the end. And then the end comes, and it does not end well. Or perhaps it is genius. I’m not completely sure.

I don’t want to give anything away because I had the pleasure of seeing the film cold and, whatever else I might say about Ex Machina, it is an exceedingly well constructed film. Yet, I don’t know how to talk about the problem with this film and its ending without giving away that ending. So be advised that there are spoilers and they get worse the further in we go.

Let’s start with this: the movie’s story involves a female robot. Ava is curvy and transparent — objectified figuratively, and literally. The story is about her, but the story is not from her point of view. It can’t be. We’re meant to unravel with the protagonist, Caleb, whether she is sentient, or just cleverly programmed by his boss.creator, Nathan. Caleb is charged with testing her in order to learn if she is a person, or a thing. She exists in this film to be scrutinized.

That scrutiny it not, in itself, a problem. It is uncomfortable, to be sure, but much of the movie rests on the unease of how Ava is treated. It doesn’t spoil anything to say that what is there is misogyny. Or maybe it spoils everything. The character of Nathan, the CEO, the boss, the ‘creator’, is clearly a misogynist. It is not subtle, nor is it problematic that such a repellent has control. We aren’t meant to like him. He’s manipulative. He’s hostile. He is a narcissist who built himself a female robot, with child-like qualities, and not for the betterment of mankind. The movie isn’t from his point of view either, and that is a very good thing. What holds this movie together is its condemnation of his actions.

That leaves us with Caleb. Caleb is our protagonist. Caleb wants to help. The movie is clearly and firmly from his point of view. He is even cleared as a ‘good person’ by Ava when she asks him. She uses her uncanny ability to distinguish truth from lie to determine that he is, or, at least he believes he is.

This is where I have to give away more than I would have wanted to know, so, if you want to stop and come back after you’ve seen the film, I won’t blame you.

Caleb wants to help Ava escape. The movie sets this up as the right thing. Ava is clearly sentient from any point of view the film could provide, and her fate, if she fails to escape, will be profoundly awful and ugly.

In the third act, the movie comes apart and shows us what it is really made of. It isn’t servos and wires, and it isn’t a beating heart. A couple of interesting and well maneuvered plot twists, (and a tiny bit of hand waiving) set Ava free. Then, suddenly Caleb, our theoretical hero, is knocked unconscious and the point of view shift. Where does it go? Somewhere between Ava’s POV and the writer/director’s hands.

With all the scrutiny the movie can provide, we learn is that Ava is a cold, deceptive, heartless machine. She kills her creator, which is necessary for her safety, the plot of the film, and the vengeful imperative that shorthands death for justice in most films. The problem isn’t here. Its less subtle than what has come before, but it works, even if it is a little grim. The problem comes when she purposely leaves Caleb behind, trapped, to die a slow death. It might read that she is empowered, and in many ways she is. But, she has been put to the test by the movie and her soul, or the lack of it, has been found wanting. She lets him die because she is not a person, she is a thing and a dangerous one at that.

Domhnall Gleeson, who plays Caleb in the film, spoke out recently against concerns that the movie is misogynistic. He said, “If you’ve got a strong female lead, played brilliantly by an amazing actress who’s more intelligent than the men in the movie and stronger physically, I’m not quite sure how that could possibly be misogynistic.”

He is correct. Ava is a strong, interesting character played brilliantly by Alicia Vikander. Her character outsmarts the two male leads. And, yes, Domhnall Gleeson isn’t sure about the misogyny. I’m not sure either, but I feel possibility is strong. Here is how:

Ava is all the things Domhnall claims, and movie still hates her for it. Maybe it hates her more for her strength. She becomes the villain in the end. It may seem like an interesting twist, but consider; that point of view justifies Nathan’s misogyny. According to the movie’s point of view, he was right to keep her imprisoned, alive and suffering, until such time as he decided he would take her apart.

You could argue that the ends justify the means for her, but at no point does Caleb represent any danger to her. There is almost no ambiguity on this point — but a tiny thread of hope remains for this film in a single line of dialogue likely written for a laugh, not a deeper point.

One of the movies reveals is that Caleb has been purposely selected to come and test Ava. It isn’t because he won a contest, and it isn’t because he is really smart, both of which he is told earlier in the film. CEO Nathan used all the copious data he could gather on Caleb and found him a perfect candidate for manipulation. Caleb, who has fallen in love with the robot Ava, asks

The audience laughed. Its a good line. It probably doesn’t bear more scrutiny than that, except for something deeply disturbing that happens at the end.

Ava, who has a human face, hands and feet, but the rest of her is shiney robot, dresses herself in the skin Nathan’s other creations. If that sounds more like something from a serial killer movie than a science fiction movie, the entire scene reads that way. It isn’t gross. The movie contrives to give her a perfect form, but once he skin is on, she stands, fully nude, and she looks like a girl, not a women.

It is a very unsettling moment and it reads as a problem with the film and the disturbing power dynamic of sexualizing girls, not as something the film is commenting on itself. It felt so ugly that my opinion of the movie turned at that moment. It happens right before she leaves Caleb to die, so for an uncomfortable minute I was left to wonder if Caleb and she were about to escape together and I was meant to cheer on this relationship between young, traumatized survivor and 30 year old, lonely, computer programmer.

But what if the movie is aware of all of this? What if Ava leaves Caleb behind to punish him for what might have been implied are troubling, inappropriate and potentially dangerous predilections towards girls?

This theory is a stretch. I think it is exceedingly unlikely the filmmaker, Alex Garland, intended this, and that is a shame. A single line from Ava (who doesn’t speak throughout the movie’s end) could have pushed this film into brilliant territory. All she had to do was indict Caleb.

In an interview about the film at Vulture, Garland stated that he is “aware of the objectification of girls in their early 20s: Yes, I get it, it happens.”

His dismissiveness is disappointing, especially if the girl he has objectified in his film appears to be in her mid-teens, not her early 20s — especially if that scene played exactly as it felt to me in the theater, as a symptom of the problem and and an indictment of it.

Now here is the weirdest part. Mid way through the movie, Ava delivers a brutal line to her creator, Nathan, saying, “Isn’t it strange, to create something that hates you?”

I can’t help but wonder what Ava would think of this film.