Why Your Star Wars Theories Mean Nothing… or Everything

My love and affection for the original, 1977 Star Wars film is so strong, and my anger (which leads to hate) of the 1999 prequels so intense, that I could not go into the new film anything but wary. Even without this baggage, I am a difficult audience. It matters to me that the film I watch makes sense. Yet I found The Force Awakens so befuddlingly enjoyable that the film managed to separate me from my usual analysis — analysis this movie was in no way ready to withstand.

Even stranger still: this is a movie begging to be analyzed, especially in the era of the fan theory. If it is a spoiler to tell you what we do not learn then you may want to stop here — because the movie scrupulously avoids letting us know who its main character, Rey, is. (More serious spoilers below.) 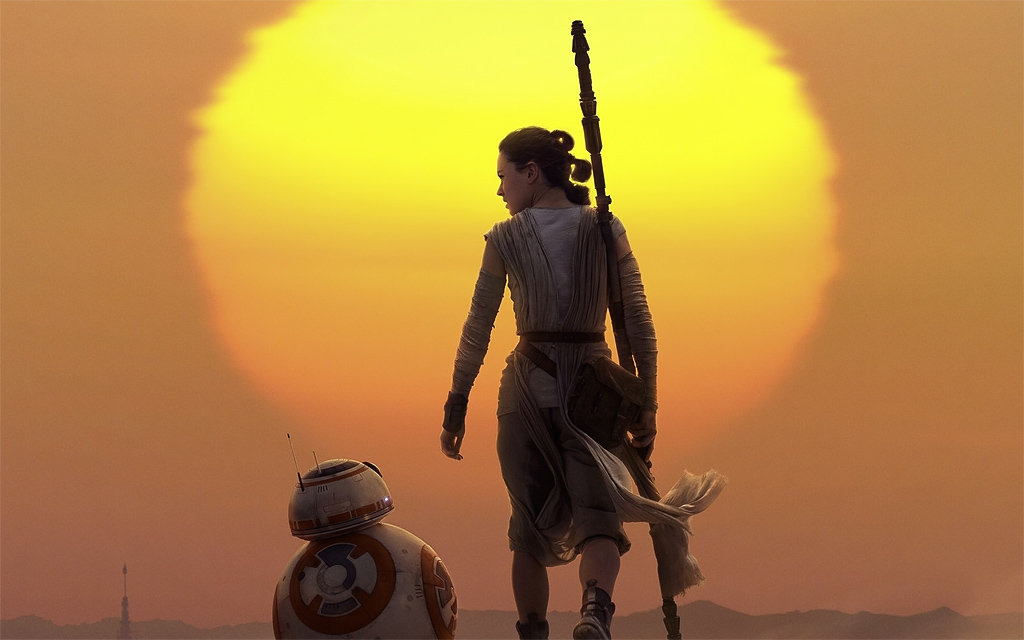 There are plenty of hints about Rey’s past. So many, in fact, that we are clearly meant to wonder, and draw our conclusion about who she is and who she may be related to. But here is the problem with everyone’s theories, mine included: None of them matter.

J.J. Abrams has purposely left open the obvious, insistent question of Rey’s parentage, leaving it for the next director to answer. There is no existent answer. Not only is Rey’s future unwritten, but, by design, literally, so is her past.

Fans can speculate that she is the daughter of Luke, or Leia, or Obi-wan, or Jek Porkins if they like. It may feel like the movie is littered with clues for one theory or another, but they will only add up when the next writer (Rian Johnson) comes along and decides who, exactly, she is. Like Schrödinger’s cat, her fate (and past) can’t be entirely determined until the box is opened, and the next film is written. Nothing any of us can guess at will make any difference at all.

Or, maybe it will make all the difference in the world (or the galaxy, far, far away).

If you know anything about J.J. Abrams, you probably know that he loves the idea of the mystery box. That metaphorical box, with its unknown contents, is what he delivers time and again. He thrives on our anticipation, wonder, and desire to know what is inside and he is very, very good at this. But his trick, unfortunately, is that box is, essentially, empty, waiting for a slight of hand move, to show us what it was inside “the whole time.”

I have, admittedly, found his method to be deceitful, like a magician claiming he is performing actual magic, rather than letting us choose to enjoy the thrill of an illusion, or the artistry of misdirection. But this time, Abrams has made no claims and that makes all the difference. It is the difference between trying to solve a puzzle (who is Rey), and speculating what might be (who will she turn out to be).

Both of these options need us to be on board with an incomplete story. If you didn’t expect The Force Awakens to end on some sort of cliffhanger, you aren’t likely to be the sort of person cooking up a fan theory.

Just like the other quantum-ish analogy of Schrödinger’s cat, the role of observer becomes meaningful. If everything was written, all the fan speculation would amount to a contest to see who can solve the mystery first. Is that meaningful? For bragging rights, yes, but not much more. But with the story unwritten, then the act of speculating and concocting theories affects the outcome.

Interesting ideas and theories generated online and in conversation tend to wend their way across the internet and the globe quickly. A few days into The Force Awakens run, there are plenty of theories swirling around. Indeed, it may be that all the reasonable and logical theories that can exist, already do, since there are a finite number of possibilities. Let’s look at a few:

Rey isn’t related to anyone we’ve met. This is the simplest solution, but also the weirdest because it explains nothing regarding her incredible abilities. (Though, does it need to? More on this in a moment.) It also means any hints that she does have some special lineage are red herrings, which could feel irksome. That said, I personally really like the idea that she is her own person, because it opens the universe up to anyone.

Rey is Luke’s daughter. There is plenty of hints at this, from her doll, helmet and clothes, to the entirety of her journey and status as protagonist. If this turns out to be true, it will come as little surprise and it will go some distance to explain her abilities as pilot and wielder of the Force. This possibility opens lots of room for story, and the healing between father and child that has, thus far in the series, been fleeting. But haven’t we been here before?

Rey is Han & Leia’s daughter. A lot of people like this theory, because it creates a kind of symmetry to the story with Kylo Ren, but to me it feels like hitting the exact same beat twice. It also makes the scenes with Leia either inexplicable, or disingenuously edited to keep us out of their mother/daughter relationship. This possibility opens lots of room for story too, since Rey witnessed Han’s death and experienced him as father figure.

Rey is Han’s daughter with someone else. I  haven’t seen this theory show up yet, but it fixes the weirdness of Leia acknowledging nothing (onscreen) but does nothing to explain her Force powers.

Rey is Leia’s daughter with someone else. I  haven’t seen this theory show up either, but why the heck not? It is worth noting that Daisy Ridley certainly bears more resemblance to Carrie Fisher, her theoretical mother, and Natalie Portman, her theoretical grandmother, than anyone else in the universe. (You can also toss Keira Knightley into the mix, if you want to dig deep into the resemblance pool, since her character’s sole purpose was to look like Padme in The Phantom Menace.)

Rey is Obi-Wan’s grandaughter. I can’t say I like much about this theory, though I’ve seen it getting traction. Rey doesn’t share many traits with Obi-Wan, other than her abilities in the Force. This theory also removes us a generation from her linage, which seems weak and messy from a narrative point of view.

Rey is Snoke’s daughter. I can’t say I like anything about this theory. Its roots live in the awful prequels, and even these are strained. (All of that is kind of true about Snoke, too, my least favorite thing in the film.) It wouldn’t even have the advantage of shock value because it is so irrational. Probably. Who knows? We know almost nothing about Snoke, so as a theory it is impossible to evaluate.

Rey is the daughter of some other named character in the series. This is lame unless it is incredibly clever and meaningful and obviously such a choice escapes me. But in all likelihood, a random choice like making her the child of Bobba Fett is as childish as making all the clones in the Clone Wars, clones of Bobba Fett’s daddy.

Then there is the question of what needs to or should be explained. Do we need to know why Rey has these amazing abilities? Would learning that her father is Luke or Han really tell us anything more about her than her Midichlorian count?

Consider this: a lot of people have commented on Rey’s Force abilities coming suddenly out of nowhere, yet, early in the film, she speaks with a fellow scavenger and, with just a few quick words, convinces him to free what they both know is a very, valuable droid. The scene doesn’t make a ton of sense unless she used the old Jedi Mind trick. Perhaps this is something she has honed from a combination of natural ability and necessity.

Later in the film, when she uses a similar power, it seems like she is doing so for the first time, but perhaps she is only realizing that this power she has is this thing they call “The Force.”

This leads to my fan theory about the entire film, and it is the reason I hope Rey turns out to be a simple orphan. Early in the film Finn’s story begins when he, as a Stormtrooper, watches another Stormtrooper die. He freezes up and is clearly jarred by what he sees. He stops and then, a moment later, he refuses an order to fire on the unarmed villagers. There is no dialogue, so we, as viewer (or observer if you will) are left to puzzle out what is going on in his head. We are required to empathize, which is a deeply powerful thing. It happens at the very moment Finn is feeling the first pangs of his own empathy.

Finn never explains what happened to him in that moment, and I hope his character never does. The little he says is more than profound enough, if you think what it means. He says, “I made a choice,” suggesting that all his actions until then were rote, the requirements of his training, and this was his first experience of free will. Unlike the many other threads that remix or retread the previous films, this one is original. A Stormtrooper, the least special person in the Star Wars galaxy, is given meaning by making a choice.

And my theory? Like the title said, the Force was awakened. It was awakened for him and for Rey who also, early in the film must make a choice (to trade BB8 for food, or suffer and keep BB8 safe). There is such a long history of the Force being tied to the choice between the light and dark side — between good and evil — that perhaps the making of these choices is what calls the Force into being.

And here is the strange thing — all the unanswered questions left open by the film, give us, the viewer, a choice to believe one theory or another about what is happening, and will happen next. As Rian Johnson and Lawrence Kasden write the next piece of Star Wars mythology, it is possible, and perhaps likely, that they will be influenced, consciously, or unconsciously, by the ideas you or I cook up based on the clues, intended or otherwise, left for us in The Force Awakens. It could be that our theories actually do matter.

Or, sadly, it could be that all these dangling threads and unanswered questions that have left us puzzling are just the result of lazy, hurried, market-driven writing, unconcerned with anything more than propelling us from one rousing action-figure-filled moment to the next, leaving us with a puzzle what can’t be solved — a box that is empty. But, even if that is how everything has been written, there is still one slim ray of light to bet on, and that is you, the makers of these endless churning of theories, who might find a way to twist the story right. If that is true, you are the only hope.