A Review of Boston’s Moulin Rouge! The Musical

Spectacular! Spectacular like fireworks.  Thrilling like a rollercoaster. Bombastic like, well, the 2001 film on which it is based. If you liked Baz Lurhman’s 2001 movie Moulin Rouge, you are going to love Moulin Rouge! The Musical. If you don’t, it probably won’t be your cup of tea, though I did watch the show win over an older gentleman in my row. Now in previews at the Colonial Theater at Emerson, this show was as spectacular as anything I have ever seen. 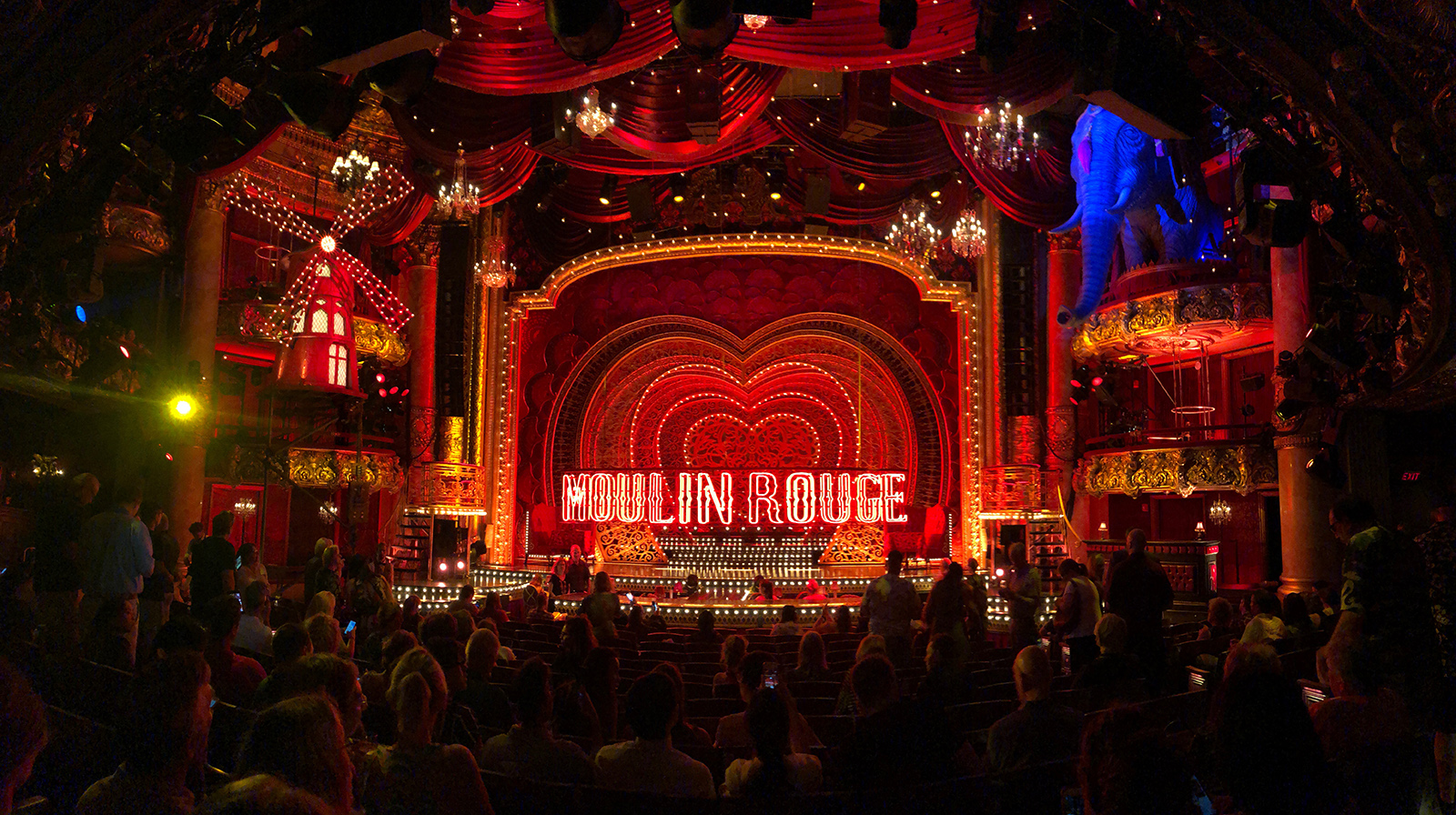 The entire musical bursts out of what seems like the world’s most ornate, elegant and colorful Instagram frame. Lighting designer Justin Townsend worked closely with  Derek McLane’s modern, laser-cut, pop-up glory set design to offer a rotating spectrum of color that makes fantastic use of the deepest reds, and the most intense blues. Vivid doesn’t begin to describe it. The height and scale of the production are magnificent, with elements of the Moulin Rogue intertwining with the restored opulence of the Colonial Theatre, like an overgrown jungle. It can be difficult to know where the set ends and the Colonial begins. Notability, the entire first act doesn’t have a single instance of green — that color is reserved for the second act, especially the absinthe-fueled Green Fairy number.

The dance numbers were tight, exuberant, and filled with personality. Several were exhilarating to the point of giving me actual chills. I am not a person who goes to the theater and gets chills, or sits in his seat and feels so glad to be here. God damn, these numbers are almost drug-like in their hypnotic delight. All of it is almost too much.

Director Alex Timbrs and Choreographer Sonya Tayeh brilliantly arrange the performers with so much grace and style that, combined with the above set and lighting design, there wasn’t a single moment throughout the three-hour show that wasn’t visually arresting. As a photographer, I can’t say enough about how well composed the show was. The cast feels absolutely massive at times.

Karen Olivo, as Satine, was glorious, and commanding. The show holds back her reveal to great effect — the audience needs a little time to be ready for her. Her entrance is a show highlight, which I won’t spoil here, but one is given the impression of being visited by a deity. Her voice is glorious in a way that recordings don’t entirely do justice to. One of my few complaints about the show is that, like most modern shows, it is mic’ed which deprives the audience of nuance and clarity of sound. I may be an outlier in this opinion, but in her solos it was possible to hear her above her own amplification and I was glad for the experience.

The show fell flat  in one very specific and jarring place — the hands of Aaron Tveit. Playing Christian, the male lead, he was an absolute dud.  Tveit can sing, but mostly failed to connect with the material or the audience.  His performance grated against everything and everyone around him, as if he insisted that what this show needed was a smarmy Disney lead who inexplicably smirks through his opening lines about how the love of his life died in his arms. He was also the only cast member to flub his lines, or step on those of his cast-mates. He pulled me out of the experience more than once.

I hope, for Tveit’s sake, and for future audiences, that he was off his game in today’s matinee — and that he isn’t the sort of performer who thinks a matinee crowd isn’t worth playing to. It is hard to imagine such a stellar production could have chosen someone who, at least for our performance, had so little chemistry with his female co-star, the stunning Karen Olivo. It was a shame to watch him drag their scenes down. That isn’t ideal for a love story. It is a testament to Olivo’s performance that, amazingly, she somehow manages to still have chemistry with him while he fails to have any with her.  I suspect she could co-star with a damp sponge and convince you she was in love with its absorbent charms. Tveit, meanwhile, suffered by comparison to everyone around him. 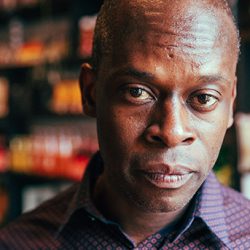 Sahr Ngaujah, as Toulouse-Lautrec, provides counterpoint to the production’s delightful bombast. He is a grounding center to the show, and his rich, tender voice is showcased singing Nature Boy, an anchor song for Moulin Rogue both here and the 2001 film on which it is based. Where John Leguizamo overtly embodied truth in that film, Ngaujah takes a stronger, even more principled role, embodying freedom as well.  Lautrec defiantly stands up to the prime antagonist, Tam Mutu’s Duke, who here is portrayed as more brutal and sinister. Honestly, despite knowing the story, I was routing for Lautrec to end up with Satine this time around, he had so much heart. 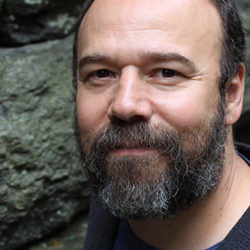 Danny Burstein plays Moulin Rogue owner Harold Zidler, a part that embodies the decadence of the club, and he seems to delight in it. I am sure it is a role that is great fun to play and he shares that joy with the audience. His character may be a little harder to empathize with than Jim Broadbent’s in the film, but I freely admit that may have more to do with the tremendous affection in my household for Broadbent. Burstein does a fantastic job, and, importantly, brings the audience back to a place of joy for the end of the show.

This brings me to my only other real complaint about Moulin Rouge: the story is simply front-loaded with all the fun. The second half is a drop in energy from the first — inevitable given the story. It isn’t a spoiler to reveal Satine dies; Christian tells the audience in the first minutes of the play. This probably says more about me and my desires than it does about the story — for it to be otherwise would require a completely different show, but I do think it is noteworthy for a show that engenders such incredible joy. Thank goodness for the encore!

The music in the show, it should come as no surprise, is outstanding. Drawing from many of the great pop songs and originals from the film, as well as a slew of additional selections, Moulin Rogue offers a delightful mashup that, at times, can run through a dozen pop references at a go. (I don’t envy whoever worked out licensing and clearance.) The audience was palpably enthusiastic, cheering on each selection as the opening bars sounded.

The diverse cast and a few very on-point notes of positive LGBTQ messaging help refresh and recontextualize a production overtly built around the themes of truth, beauty, freedom, and love. In 2001 these were lovely, bohemian dreams taken from 1899 Paris. Like so much art today with any heart, they now feel like part of the on-going Resistance.

One thing missing from this production are the Bollywood flourishes seen in the film. The song Hindi Sad Diamonds has been cut from the line-up and it may be that musical director Justin Levine and the director felt such a number hewed too closely to cultural appropriation. The film fails in this regard, so it is an understandable choice. I personally would have preferred to see them lean into it, adding appropriate casting to the show.

Perhaps the highest praise I can offer is that, when it was over, I found myself wondering what took so long. Moulin Rogue feels like it will be a natural addition to the classic Broadway catalog. Get your tickets while they last in Boston, this show is going to be on Broadway for a very long time.